Too Practically Minded to be of any Theological Good

This is the first part on a series of posts relating to the recent LA Theology conference I had the privilege of attending. The subsequent entries in this series will deal with the particulars of the talks I attended, but before I talk about those I had a few general thoughts.

I decided to attend this conference mostly on a whim after reading about it on Fred Sander’s blog. I didn’t know anyone there - I’m neither a theologian nor an academic and I only just moved to the west coast. But I’ve had a special love of theology and philosophy since I was in High School, so I thought it might be interesting.

And it was interesting, albeit in ways I didn’t quite expect.

I enjoyed the talks at this conference; they were interesting, well presented and well argued. I was fairly surprised by how much I could follow. I’m not an academic and I’ve never even taken a formal theology class (though I’ve done a lot of study on my own), but there were only a few times where I wasn’t familiar with the material. I got most of the references and the arguments were usually pretty straightforward.

But I realized fairly quickly that my approach to the subject was very different than most of the people there. I’ve had to live most of my Christian life holding two things in tension: On the one hand I have to justify my interest in philosophy as something worth pursuing to the general Evangelical world (where such things aren’t typically held in high regard) and on the other hand I have to defend the common man against a theological precision he has no hope of ever attaining. How do we conceptualize the Christian life such that a Thomas Aquinas and a 3rd world illiterate working man can share the same faith, while at the same time not presenting theology as a meaningless waste of time? I don’t know how to answer that question.

Now don’t take this the wrong way; I don’t think I’d call myself practical or pragmatic. The problem with that philosophy is that it assumes the goal is obvious and anything which distracts from an immediate focus on that goal is irrational. But in reality the goal is not obvious.

For example someone might argue that a scholastic, systematic approach to theology is wrongheaded because it has no obvious “application” to our everyday lives. Left unstated is something like this: “the goal of life is [prosperity, comfort, ease, moral living, …] and this kind of theology doesn’t appear to have any obvious impact on that goal.” When you look at it that way its clear why pragmatism is hopelessly misguided. The purpose for our existence has to be something more than just prosperity, comfort, ease or moral living. So if your goal is wrong pragmaticism gets you nowhere.

More than that its mistaken for a second reason: Choosing the most obvious path to our goal is not always the best path. At the very least we can’t simply take this for granted. Sometimes you have to go the long way around to get to where you need to go and the shortcut will never get you there.

Here’s a strange connection: Have you heard of optimization problems? You see them all the time in mathematics and computer science. For example suppose you’re at your house and you want to find the quickest way to get to your local post office. This is an optimization problem. There are a great many ways you could get to your local post office, and you’re trying to find the “best” one (where “best” is something like shortest).

It seems to me that pragmatism is an example of one type of solution to this problem, a Greedy Algorithm:

A greedy algorithm is an algorithm that follows the problem solving heuristic of making the locally optimal choice at each stage with the hope of finding a global optimum. Wikipedia

But the problem with greedy algorithms is that they sometimes get stuck at a “locally optimal” solution and never make it to the “globally optimal” one: 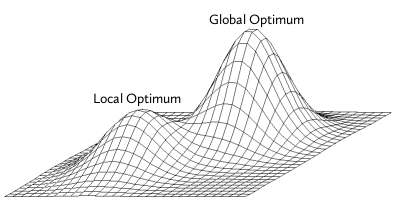 And this kind of proves my point: I don’t think there’s any way I could’ve know ahead of time that a bullet point from a highly specialized, technical discipline would have broad, far-reaching ramifications for my approach to decision making.