So here’s a sadly common story:

A startup with an existing web application is seeking to get into the mobile space by producing both an Android and iOS app. Seeing as they both already have the necessary skills to produce a web application and they’d rather not have to learn, build and maintain another two versions of their application, they attempt to create a mobile application using web technologies via PhoneGap.

Almost without fail that first version of their application is a disaster. Slow, clunky, unstable and riddled with bugs, they’ll spend the next 6 months trying to get it to work in some sensible way. Eventually they’ll admit defeat, scrap the old app, and build a new, native one from scratch.

And that’s pretty depressing. One of the supposed advantages of the web was that we could finally do away with so many operating system idiosyncrasies. No longer would we have to make 3 versions of every piece of software (windows, mac, unix) and instead we could make one application which could run everywhere. And then after perhaps half a decade, we threw all that out and recreated the multiplicity of platforms we thought we’d gotten rid of.

Actually it’s worse than that. A mere 3 versions of the application is a pipe dream. In reality you also have to consider all the various devices, in all their various resolutions and capabilities, and all the various versions of the operating systems. This list of Android devices is the stuff developer nightmares are made out of. Serious Android shops really do just have 100s of mobile phones to test on. (because it’s the only way to be sure it actually works for your users)

I can’t believe I’m about to say this, but it makes the almost 10 years we spent working around IE6 bugs seem easy by comparison.

Looking back at the one Android app I built I did come to appreciate one thing about it though. I think perhaps our original inclination about building one app for multiple platforms wasn’t entirely hopeless - it was just in the wrong direction.

Why do we think that HTML, CSS and Javascript represent the ideal set of technologies to build user interfaces? When you actually consider their origins and the original purpose for which they were designed, they are a remarkably poor fit for what we ended up doing with them. HTML is a language to represent hypertext - that is to say a language that gives some structure to basically textual content, and to provide links between different sets of textual content. It’s designed for an encyclopedia. But we aren’t building encyclopedias, at least not most of us, and how much of a modern web application even resembles textual content?

Now I’m not sure I can actually make this argument - it’s the kind of thing that’s really hard to recognize until you see an alternative - but I’ll give it a shot anyway. Here are a few of the problems I see:

I could probably keep going, but at this point I want to introduce a radically different way of writing web applications which I called Canvas UI.

The idea is this: rather than using HTML & CSS as the bedrock of frontend web development we use a more rudimentary graphical API (Canvas, WebGL or SVG), build frameworks on top of that base and develop our actual application using an entirely different set of technologies.

Over the last couple weeks I threw together an example which implements the same functionality as my previous WebRTC example. Source code is available here. Though crude, buggy and clearly not a viable solution, I think there’s enough here to show what it could look like. 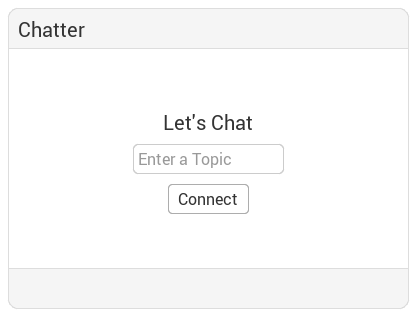 The application is drawn on a large, full-page canvas, with the only HTML & CSS being used to create that canvas. All drawing is done via Javascript in an OO class-based component model like this:

Not for the faint of heart, this is a no-frills approach to web development. To list just a few of things you’d need to pull this off:

So you might wonder why anyone in their right mind would suggest such a thing. It’s because it offers maximum flexibility. Sure throwing out everything we have given to us with a modern browser is hard, but think of the other side: no longer beholden to whims of the w3c and browser makers you can develop entirely different approaches to rendering GUIs. To give a few examples:

And I suspect given a full-blown framework with lots of features we’d see ways of doing things we couldn’t imagine before.

So where do we go from here? Well the truth is I don’t really have much drive to finish this project. I already know all the standard web technologies, and UIs are mostly a means to an end for me. I’d rather focus on real coding. But maybe some day we’ll see some radically different approaches to building UIs for the web.

This is the final post in this series. The previous 4 were: WebRTC, Non-RESTful APIs, Cloud IDEs and Static Hosting.